Finally! I honestly can't believe it's been so long since the last update. But I feel like this version has enough new stuff packed into it that it's almost worth the wait! Head on over to Play the Game to try it out, or if you want to play the cheat-enabled version, including access to the incomplete full-female Lith content, a donation of any amount via the link to the right will get you a copy of MVOL+ right in your inbox. And if you donate $25 or more, you'll go on the list to get v0.16+ ahead of everyone else!

Now, with that out of the way, let's talk about what's new in MVOL v0.15!
-New face for Lith! In the very first version I released to the public, all I had in that box was a few numbers. It was certainly informative, but I considered the switch to a derpy little cartoon face a serious upgrade, both for the quality of gameplay and for making it feel like you were actively interacting with a person. Now, I've finally switched out that derpy little face for... a less derpy little cartoon face! I spent a lot of time studying art that I liked and had similarities to what I was going for, and I actually started by tracing a few of these sources, but I've modified it so heavily trying to make it just right for Lith that I doubt anyone could spot my sources. I experimented with more expressive eyes and a pretty anime-style scale of blushes, though I'm still not sure I made the right choices with those. I'm certainly hoping they're clear enough to be useful in gameplay, and I'm looking forward to getting some feedback from you all on them.

-Loading screen. It may not have come up for most of you, but some players, especially on mobile devices, didn't always load the game instantly. This lead to a rather disturbing glimpse of the game's developer screen in which Lith is a monstrosity and the text is, I'm told, a satanic ritual invoked to hold all my wonky coding together. So now there's a pretty little screen to shield your eyes from the horrors of the abyss! Also, rather more significantly, the game now requires a few moments to establish a connection with my server at startup, as I expound upon below!

-Wooden Door added. The big new chunk of the story is to finally see just what's going on behind the wooden door! This is something of a jump in a new direction for me (again) so I'm a little nervous about how you all will receive it, but I think it will serve as something of an enriching "side plot" for the game. In the future, the wooden door will become a second place you can go to to play and enjoy yourself in a less linear fashion, but this update largely sets up the wooden door, introducing you to what's going on and giving you a little taste of what's to come. There is one major sex scene, with two rather distinctive versions available-- and a third for those with certain settings going on MVOL+! Sadly, the actual "full" content of the wooden door isn't yet ready, but I hope that what I've added so far will both intrigue and satisfy you!

-Adjusted difficulty. I've gotten a lot of feedback on the game's difficulty and the "grindiness" of some portions, and after going through the game some myself, I have to agree that some portions have been unnecessarily time consuming. I try to encourage players to try each scene multiple times, but it shouldn't be necessary to mash a single scene a dozen times to unlock the next portion of the game. With that in mind, I've made actions across the board more potent, and Lith's dominance especially is now easier to maintain. Specifically, it no longer acts exactly the same as other stats, but will fall more slowly when it nears the point of regressing to a lower stage, and the highest stage of dominance especially is now slightly easier to reach and maintain.

-Play data collection. This feedback pressed an issue that has been bothering me for some time. I want My Very Own Lith to be a good game by every measure, including by conventional gameplay, such as it is. But the truth is, it's difficult for me to judge the gameplay myself since I know it from the other side. Many game developers solve this problem by bringing people in and simply watching them play the game, so they can understand where the players might get stuck, or bored, or what have you. Now, with MVOL being the kind of game it is, that's probably not a good idea to do directly. Creepy. But with a little (well, a lot of) help from my code-savvy friend Kylor, we've been able to institute a system that's almost as good. Now, any copy of the game played on a device with an internet connection will patch in to my server and send me basic, anonymous data on how the game is played. This means I can follow how the game is played on an individual level or sift through massive amounts of data to learn what scenes are accessed most and least, and in general just get all sorts of interesting information about how the game is played. It's my hope that, armed with this data, I'll be able to refine the game to play better and more closely to my original intentions, and without too many hiccups or problems at any point in the story. I'm really excited to see how this turns out and what it will mean for future versions of the game, and I hope you are too! Of course, if you don't want to send this data in for whatever reason, there is an option in the Options menu to turn off this connection.

I believe that just about covers it! As I've mentioned, I already have some content for v0.16 written up, and I've started going through it again to see about getting back to work, but I may tackle my first TagIt Story first, I'm not sure. Either way, I sincerely hope that I'll have a good chunk of story and some gameplay adjustments based on the data I've gotten ready in the near future, and that should be enough to get v0.16 up and out the door much sooner than v0.15 was! I've just recently finished my very last commission, and while it was a great experience, it's great to finally have all that unfinished work off my shoulders, and I've got big hopes for getting more into the game and my own writing in the future! To everyone that's stuck around all this time, and to those that have come to check out the game more recently, as ever: thank you all for your patience, and thank you for playing! I hope you find it was worth the wait!
Posted by Lithier at 9:43 AM 10 comments:

Yesterday evening, in a small frenzy of activity, v0.15 was rendered complete and ready to play. For my most generous donators, those who contributed $25 or more to v0.14, I sent out the new version to be played immediately (along with an update briefly afterward when we finally got the Android version working xP).

If you didn't get a copy but believe you should have been on that list, shoot me an email at lithiers@gmail.com and we'll get it straightened out.

If you didn't get a copy but you really want to, you can either wait until next Friday, the day after Christmas, when the new version goes fully public, or you can donate any amount any time this week to get v0.15+ for yourself. Donations over $25 will, as always, get you put on the list to get a copy of v0.16+ as soon as it's ready as well :3

It feels great to finally have a new version ready to go, and I'm looking forward to seeing how you all like it, and how the new play feedback system works ^.^ My thanks to everyone that's stuck around, and I hope you'll find it was worth the wait!
Posted by Lithier at 5:17 PM No comments:

We hit a rough patch in the home stretch, but things are picking up again, and I'm getting excited! The server is alllmost all set up, and I've finished making alternates for Lith's face. That means I just need to import all of them to the game and get them integrated into the code. Further, the loading screen is working well, I just need a placeholder logo to slap on it and it should be good to go. I've refined Lith's face some, thanks everyone for your feedback! Here's a new preview of more of a mid to late game Lith. 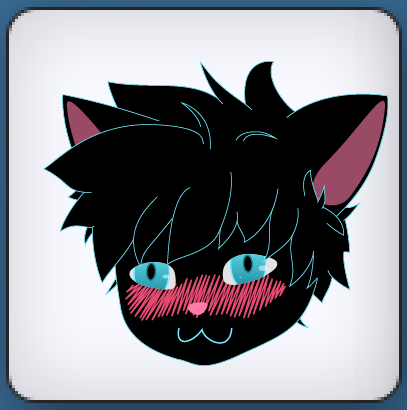 It's been a strong reminder working on this that no, I'm still not a graphic artist :P But I consider it a much better placeholder than the derpy thing we started with! Plus this is still three times the size it'll actually be in the game, so hopefully it'll be fairly acceptable for gameplay xP Anyway, with everything entering the final stages, I'm hoping to start sending out advance copies to the $25+ donators sometime next week! The game's progress is in the final stage:

Woo! I can't believe it's taken this long @_@; but on the bright side, I've already got some of the content written up for the version after, so hopefully once I've finished my last commission I can jump on that, and combined with the feedback I get from people playing this upcoming version, I should have no problem making a meaty (and hopefully speedy) v0.16!

Speaking of my stories, if you haven't seen it, I've released a new story that's a little more in my old style, a "for me" kinda story about what happens when you hold a goddess of fertility captive. It was great stretching my legs and pushing some boundaries again, and I hope it's the first of many to come in my return to more sincere, risky but fun stories! Take a look and leave a comment on SoFurry and FurAffinity!

Thanks for your patience, everyone, and I hope I'll have more for you real soon!