A Word on the Game's Progress

I was going to post another Games That Could Be post today, but I've put that off because I feel I should talk a little bit about the Game That Is. I've been avoiding talking about it because I've been hoping to have better news, but things haven't been improving so far.

I've written up a fair bit of content for v0.15, probably something like 20-25% of what I'd consider a full update's worth, along with a few adjustments I'm still ironing out to hopefully address the difficulty concerns we explored in a poll a while ago.

I think that once this update is actually ready, a lot of people will be happy to see the new content-- I'm introducing a way to address a lot of more niche interests without making the game as a whole overly complicated. It will also introduce a sort of sub-plot, to give you something to think on besides just Lith's developing issues, which I've mentioned previously as the main conflict for the story we're going to see unfold.

The problem is that I've hit a certain wall-- and I've been scraping at it for about a month now. It's brought my commissions grinding to a halt as well, and I've been doing some personal exploration to try and find the way to put the passion back into my work. The problem, to put it briefly, is that I can't write a good sex scene right now.

I like to think that detailed, evocative sex scenes are a specialty of mine, and I've always enjoyed a wild variety of themes, especially many of those around which MVOL is centered. I can't say I expected this sort of problem to come up, but honestly, any time I sit down to write new sensual material, it just feels cookie cutter and uninteresting. I could never publish an update with any of the sex I'm trying to write in it right now. So the game has come to a standstill.

This doesn't mean the game is stopping entirely. I'm working with the artist I mentioned previously, and while I don't want to jinx anything, it's looking like a strong possibility the game will be getting a much-needed influx of actual artistic talent to round out its sexy new look. I'm very excited to see how this goes!

And in the meantime, I'm still working on myself, and through this personal conflict, the game. I'm not going to let the quality of this game founder, so the sexual content isn't going to advance until I can find the drive in myself again to write something I think is worthwhile. I know this will be a disappointment for many of you, and I'm sorry, but I hope sincerely that I can overcome this soon. I appreciate everyone's support, and I'll be sure to keep everyone updated.

Until I have better news, I guess you can enjoy more of my pipe dream ideas for future games! It's been great putting this stuff down and getting some feedback on it. Oh, and since I gave a rough estimate, I guess I'll include an official progress bar:

30% of the way to an update-worthy amount of content. I've been playing with the idea of including enough non-sexual content to make it a worthwhile whole, but seeing as this is largely a sexual game, and this particular update's purpose is almost entirely focused on sexual goals, it seems like very much a last resort. We'll see how it goes from here! Thanks again, folks!
Posted by Lithier at 8:21 PM 4 comments:

Sadly, the forums haven't been seeing very much activity in recent days, but every once in a while, a gem pops up and I'm glad I started the place up. If you haven't seen, a certain fan of the game saw fit to draw some terribly adorable figures of Lith!

And if that wasn't enough, they then went on to draw up a whole bunch of expressions for the feline! 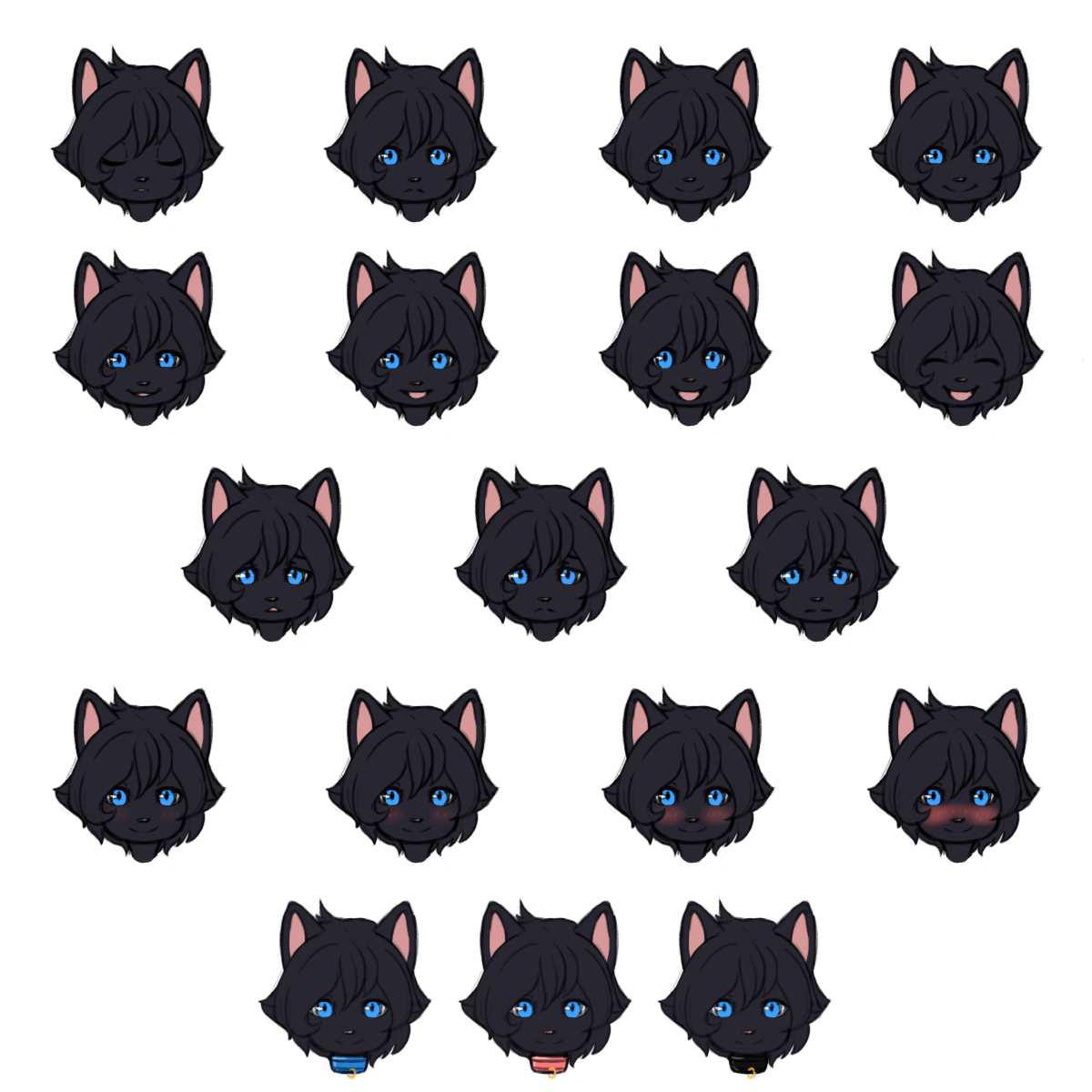 Suffice it to say, I thought it was all very well done, so much so I just couldn't resist showing it to everyone that might be remotely interested :3 And ah, don't tell anybody, but I'm keeping in close contact with the artist in question. You may be hearing more about this later...
Posted by Lithier at 5:20 AM 9 comments:

Games That Could Be: Virus - Gameplay

Hey, I've been seeing a lot of positive feedback on Virus so far, and that's great ^_^ I don't know if and when I'll actually be able to make this game, but it would probably have to be either after MVOL is finished or as a side project if I could get a few people's help with it. First, though, I have several other game ideas to talk over after this one! I'm interested to see if folks are as interested in the others, or if I've already started out with my strongest :p Let's get to it!

Last time we talked about the concept for the game idea of mine called "Virus." You play a sex god that acts like a virus, infecting people to try and take over a mining outpost one fuck at a time. Now, let's talk a bit about how this game would actually play!

My current concept is that the game would play as something of a roguelike simulation strategy game, with lots of smut written in as rewards for taking another step toward victory. The game would be on a clock and calendar, and the outpost/village/town it's set in would be designed so that it actually "lives" a little. Each person would have their own routines for where they are and what they do at a given time of day, with various little events sprinkled in for variety.

One of the main challenges would be to infect as many people as you can without arousing suspicion. If one of your followers goes to the bar every single day after work, but he's suddenly going straight home to masturbate for three hours straight and fuel your powers, his friends might start thinking there's something wrong with him. Being caught forcing yourself on someone would be a disaster, so you have to be careful to find ways to get your follower alone with the unbeliever. And worse, if your follower can't bring the victim to orgasm, you can't infect them, and probably won't be able to wipe their memory-- meaning you'll probably get busted pretty quickly.

Gameplay would be broken down into hour-long chunks. You can check what each of your followers is doing, maybe pick up a few snippets of conversation (which can include useful hints for future events), then choose one to guide more personally. Depending on how much of your abilities you've re-awakened, you may be able to set a few followers to masturbating while focusing on another, and further depending on your abilities and how much of your power you're willing to spend, you might simply watch what they do and influence it a little this way or that, put forceful suggestions in their mind, or right out take over and make them do something they'd never do otherwise. Of course, you may want to save some power for wiping their memories afterward, as even a follower can turn themselves in if they realize they're surely being possessed.

Each person in the outpost would have a wide variety of features: suspicion scores for everyone else in the outpost, which behave differently depending on relation; a unique occupation and personal traits that may bring opportunities for manipulating others into sex, gathering information, or preventing your discovery; suspicion of themselves, as well as of your opponent; and sexual factors that can influence their interest in sex, their stamina, and their abilities to force, coerce, or seduce others. Your own abilities could be developed to influence many of these to your advantage.

My main idea for the game right now is to make it a roguelike in the sense that you play off of a single save file --meaning your every decision matters, and you'd do well to play cautiously-- and every time you start a new game, the world undergoes a degree of random generation. The characters would be the same, but they might have different sexual stats, be more or less attached to various friends and family, and even be more likely to cheat if their sexual stats differ too greatly from their mates'. The random events that come up throughout the game would be drawn fresh from many possibilities each playthrough, and the length of the winter can give you a longer or shorter deadline than you might expect, though the forecast at least gives you a rough idea of how long you have. And perhaps most importantly, the arrival of your opponent is partly random and partly based on your actions. If you arouse little suspicion, your opponent might not even arrive until you're ready to defeat him on the spot, but if you scare everyone into praying and screaming about demons early on, you likely won't live to see the spring.

That should cover the basics of the gameplay as I'm imagining it right now. Next time, I'll talk more about the opponent, who embodies your main lose condition in the game. Thanks for reading!
Posted by Lithier at 5:49 PM 8 comments: